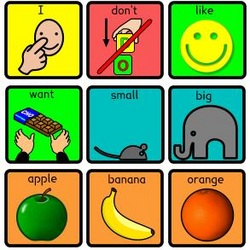 Click on your browser back arrow, or the image left, or use the return arrow at the bottom of this page to return to the Main Creating Communication Books and Boards page.

Research has shown (see articles listed below) that the use of colour can have a positive effect on a Learner's ability to work with an AAC system. Colour can be used to pick out parts of speech or to group certain categories of vocabulary.

Back in 1929, Edith Fitzgerald wrote a book entitled 'Straight Language For Deaf' which, as its name implies, is a manual on a method for teaching language and grammar to those people who have little or no hearing. Although Edith divides sentences up into parts of speech, and has a key system for doing this, at no point in the book does she talk about a colour encoding system (Fitzgerald's original key was based on a set of six symbols with each standing for a particular part of speech). However, such a colour encoding system has been attributed to her and it has become known as the  Fitzgerald Color (colour) coding system. It is a means to classify different parts of speech and to make them easily distinguishable from one another. Though there appears to be no one set colour standard for every part of speech in the system, some colours are consistently used:

beyond that there appears to be a variety of colours used in what generally is referred to as a 'modified Fitzgerald key':

It should be stressed that you will find all manner of variations on the 'Fitzgerald key' in use although it is recommended that you
consistently maintain at least one 'standard'.

Of course, there may be classes within classes: for example, there are modal and auxiliary verbs as well as lexical verbs. All will be colour coded green but a variation in the tone of green used can be made to great effect.  Also, where nouns are grouped according to categories, each category could have an alternating shade of orange such that neighbouring categories are distinguishable.

ALTERNATIVES TO FITZGERALD
There are alternative colour coding systems available. Indeed, you can devise your own. As long as it consistently applied across the curriculum and across the establishment then there should be no complications.

If you are aware of any alternative colour encoding systems, please contact Talksense and let us know; we will add them to the listing.

Laws, G. (2002), Working memory in children and adolescents with Down syndrome: evidence from a colour memory experiment. Journal of Child Psychology and Psychiatry, Volume 43 (3), pp. 353 - 364

Wilkinson, K. M., Carlin, M., & Thistle, J. (2008). The role of color cues in facilitating accurate and rapid location of aided symbols by children with and without Down Syndrome. American Journal of Speech-Language-Pathology, Volume 17, pp. 179 - 193

Wilkinson, K.M., & Coombs, B. (2010). Preliminary exploration of the effect of background color on the speed and accuracy of search for an aided symbol target by typically developing preschoolers.  Early Childhood Services; Special Issue on Augmentative and Alternative Communication, Volume 4, pp. 33 - 47.

All the illustrations for this section use the Fitzgerald Key colour orange to represent a noun for the symbol for ‘banana’. As long as the use remains consistent through a board set, any shade or tone of orange could be used as long as it distinguishable from other colours on the
board.

As far as TalkSense is aware, there is only one system offering automatic background colouring. That system is Voice Symbol. However, if you know of another software system that is used for creating communication boards that also offers this feature please e-mail and tell me.

Voice symbol includes an automated system for colour encoding cells to save the designer both time and effort when building boards and ensuring consistency across boards and systems. The A.C.E. (Automatic Colour Encoding) system is switched off by default and has to be switched on manually from the GM panel. Once turned on, as symbols are stamped into cells, so a background colour is automatically applied. The default colours follow the Fitzgerald key, however, any colour can easily be set from within the system.  A problem occurs were a word can act as more than one part of speech: as a high percentage of words in English behave this way, it is a bit of a headache! Consider the word ‘go’. If you were asked what part of speech it was, you would probably say a verb. However, if you have a go at something; ‘go’ here is acting as a noun! Therefore, how can the software‘know’ what colour to add to a background: green for a verb or orange for a noun? The answer is, it doesn’t. It has be taught both! It will first stamp one colour (green) and then, if that’s not how you intend using the symbol, it will change it to another (orange) if you select  F4 from your keyboard. F4 acts to cycle through the available colours for any vocabulary unit. Some words have been assigned up to six colours because the word can act as six different parts of speech!

Not only can you change the colour assigned to a part of speech, you can rearrange the order in which the colours are stamped. As such, the system is totally customisable. It is not the function of this Sure Start Sheet to describe how to adjust the settings for the A.C.E. scheme, this is covered in the Voice Symbol user manual.

Colours can also be adjusted manually, if you are designing a cell that is an exception to the rule and, so, all eventualities are covered.

Colours as a means to select encoded vocabulary

The learner sits on one side of the the Etran frame and a staff member sits on the other. The frame is made of clear acrylic with a central hole to provide an even clearer view through the system for both Learner and staff. The Learner can look at a particular item to indicate a vocabulary selection. The staff member can see where the Learner is looking and therefore knows which vocabulary item has been selected.

It is easy to tell where a Learner is looking with a two item system as depicted but what if there are 16 or 32 or more items? It may not be so easy to decide at which item the Learner is looking as the general area of gaze may encompass several symbols. 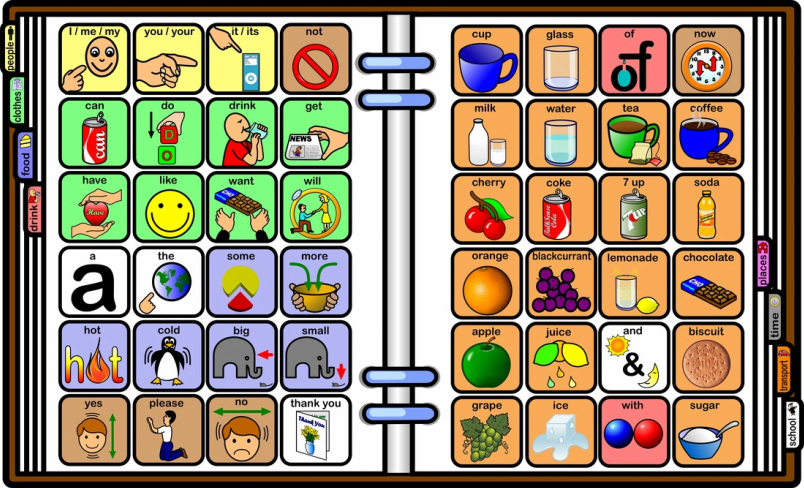 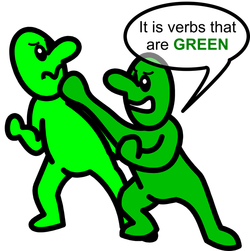 A word of warning! If you are using one colour encoding system for the development of AAC then it is potentially confusing to have other members of staff using other colour coding systems for other purposes especially if they are to do with any aspect of language learning. Whatever system you select, ensure it is consistently applied across the curriculum  and that no conflicting system is being used by others which will serve to confuse Learners. 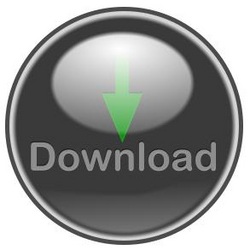 Each Sure Start Sheet is a Microsodt Word document.

It may be freely used for non-commercial purposes.

Click on the Left Arrow below to retrun to the Main Creating Communication Books and Boards Page
or
hit the Up Arrow to return to the top of this page.